The Virgin's Spy by Laura Andersen 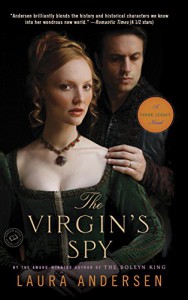 ARC received from publisher via NetGalley.

I've enjoyed this alternative history saga of the later Tudor dynasty. With The Virgin's Spy we are delving later into Elizabeth I's reign and conflicts with Ireland, and the queen's desire to keep Ireland under her control all the while seeking the right marriage for her daughter to keep everybody happy. No small feat, especially when her daughter prefers the son of Minuette, the Queen's childhood friend.

Spy concentrates more on Stephen, Minuette's oldest son and his dealings in Ireland on behalf of the queen. Matters of the heart tempt his loyalties to the crown, and that's just one worry for England seeing as how Philip of Spain has married Mary, Queen of Scots and produced a heir. It seems wagons all over Europe are circling.

There's a lot going on in this book, and that might be why I didn't finish it as quickly as I have the others in the series. The stories are expanded beyond the original trilogy, which I loved, and moving on to supporting players who haven't held my interest as much. Granted, I did like the story but found I could put it down for a day or two before resuming.

Just a minor spoiler, the book ends on a cliffhanger, so we'll see how everything plays out in the next one.